What we've been told about nutrition is often wrong.

Pimento cheese may be considered a quintessential southern dish. Many of us associate it with white bread sandwiches, family reunions, and funerals. But its roots lie outside the deep south, as so many dishes do. (Jump straight to the recipe).

However, cream cheese is missing from many traditional southern recipes. It was missing from those in my family, which contained generous amounts of mayo instead. Why might that be?

The early 20th century was an era of industrialization, and mass-produced food was part of that movement. Pimento cheese, with a cream cheese base, came along for the ride. By 1910, Minnesota and North Dakota grocers were running newspaper ads pitching “Pimiento Cheese—Something New.”

After World War II, the popularity of pimento cheese began to wane, and [it] disappeared from grocery store shelves. But somewhere along the line, Southern cooks took what originated as an industrial food product and started creating their own recipes for making it from scratch, in the process turning it into something truly delicious that is associated very closely with the South.

In a recent issue of Bon Appétit, pimento cheese—a mix of grated cheddar, mayonnaise and diced pimiento peppers—oozed from a crock of macaroni and cheese. On Today and in newspapers nationwide, it has guest-starred in potato gratin at the hands of Matt and Ted Lee, two stewards of Southern food. At Costco, it’s been sold rolled into sushi… Such widespread iterations provoked Adam Rapoport of Bon Appétit to predict 2011 would be the “Year of Pimento Cheese” …

Reflecting a revival, of sorts, of its origins:

When it first appeared in the early 20th century, dainty pimento cheese sandwiches were served crustless at tea parties across the nation. They were regarded as a delicacy due to the high cost of cheese and pimiento peppers, then imported from Spain.

Agriculture was not immune from early 20th century industrialization. The Smith Lever Act formalized agricultural research and education in 1914. Farmers near Griffin, GA, began growing domestic pimentos in the teens.

Today, the nation’s largest pimento (or pimiento) pepper company is family-run and operates plants in North Carolina and California. The pimientos are grown domestically.

Contrary to what you might read, bell peppers are not the same thing as pimientos.
Essentials: quality, sharp or extra-sharp cheddar cheese.

Post-WWII traditional: use only cheddar cheese, pimentos and mayo.

Organic note: I don’t know of any organic pimientos. Of course, you can substitute organic cheese, but you truly want a sharp cheddar in the mix for the bite.

Pimento Cheese, the pate of the deep south 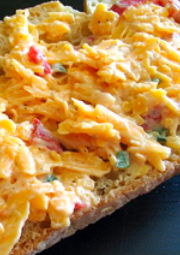 Pimento cheese is a quintessential southern delicacy, best made from scratch rather than purchased from industrial food manufacturers!

Let the pimento cheese sit at room temperature at least 20 minutes before serving. Serve with crackers or celery. Use as alternative for toasted cheese sandwich or hamburger topping. You’re limited only by your imagination. Enjoy!

Here’s an award-winning recipe from The Southern Foodways Alliance as well as a basic recipe from Paula Dean.

I have only recently learned of Palmetto Pimento Cheese. Try some if you’re in/near South Carolina or Georgia.

Posted by Kathy Gill on 6 August 2016 in Recipes, Side
3 Comments
Tags:cheese
Share this article:

This is a new website, and it still has construction debris and unfinished rooms!